Because MIDI is an audio format, and does not store notation.

Suppose you have a video of someone playing piano.

If the video is good enough to should every key being pressed, could you reconstruct the sheet music?

While you can certainly notate something internally consistent, it may not match what the musicians started with.

If we know enough music theory, we can infer the probable answers to questions like this.

When a notation editor imports a MIDI file, it must make choices like these.

What is MIDI, anyway?

MIDI stands for Musical Instrument Digital Interface.  This may seem odd, since the MIDI file on your computer isn’t interfacing with any instruments.  However, the name was originally accurate: it was a way for different electronic musical instruments to communicate.  You could connect a keyboard with MIDI output to a synthesizer with MIDI input.  Pressing keys on the keyboard would send MIDI events to the synthesizer, telling it which notes to play.

What if you want to store your performance?  You could just record the audio output from the synthesizer, but it would be much more compact to store the sequence of events from the keyboard to the synthesizer.  This became a standard of its own: the SMF (Standard MIDI File)2.  These files usually have a .mid extension3.

So, the MIDI file we are trying to import contains MIDI events (such as which key was pressed on a keyboard) and time-stamps (when that key was pressed).

Let’s start with a dance set that changes both rhythm and key.  For the source files, go to The LYCO Sheet Music Archive – Haymaker’s Jig Set.  We will export from Sibelius 7.1.3 to MIDI, then back to Sibelius. 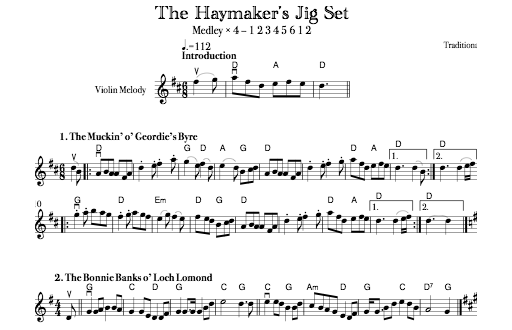 Sheet music before exporting from Sibelius to MIDI file

All nicely formatted, and then… 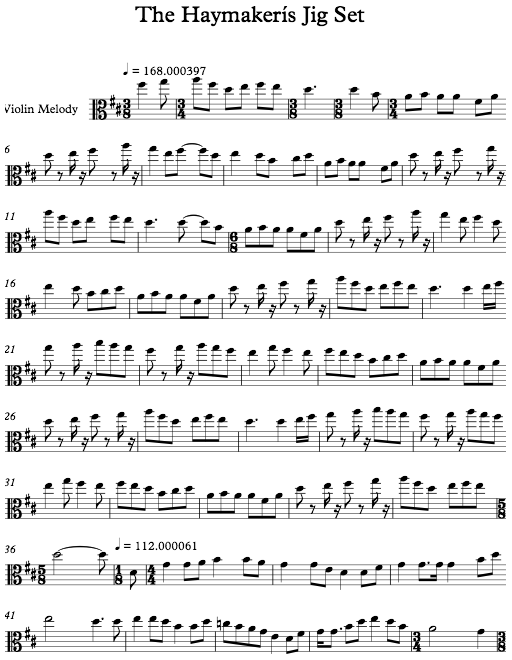 Sheet music after importing from MIDI file to Sibelius

The exact changes you see will vary between applications, and even versions of the same application. Sibelius is used here as an example, but it is not specifically good or bad at MIDI import or export.

The very first symbol in the music changed from treble clef to alto.  Some combination of instrument name, synthesizer number4 and range turned this instrument into a viola.

Partial bars have received a separate time signature.  For some reason the first full line incorrectly became 3/4 time, while the following lines turn into 6/8.

MIDI stores tempo and time stamps in a way that causes rounding problems.  When converted back into beats per minute, there are slight changes – which are displayed her to 6 significant figures.

The imported piece correctly starts with D major, but turns the single C♮ into an accidental.  This is fairly common: pieces with key changes will be imported with the correct starting key, but acquire accidentals towards the end.

Repeats, including first and second time bars, have been written out in full.

Most text – the subtitle, movement titles and chord symbols – disappeared.  The piece title survived, but the apostrophe was not an ASCII character, and became corrupted.

What if the MIDI file I’m trying to import looks even worse, with no obvious rhythm?

If your MIDI file was recorded “live” by a pianist without specifying the tempo they were recording at, notes may appear apparently at random.  You will need to tell your notation program to quantise it.  This tells it to make a further attempt at rounding notes to a sensible positition.

Can I do anything to help?

When you import a MIDI file, you may be asked to choose import settings.  Choose these to match what you know about the piece, and it will be easier to clean up.  For example, if you know there are no triplets, don’t let it turn rhythmically ambiguous passages into triplets. 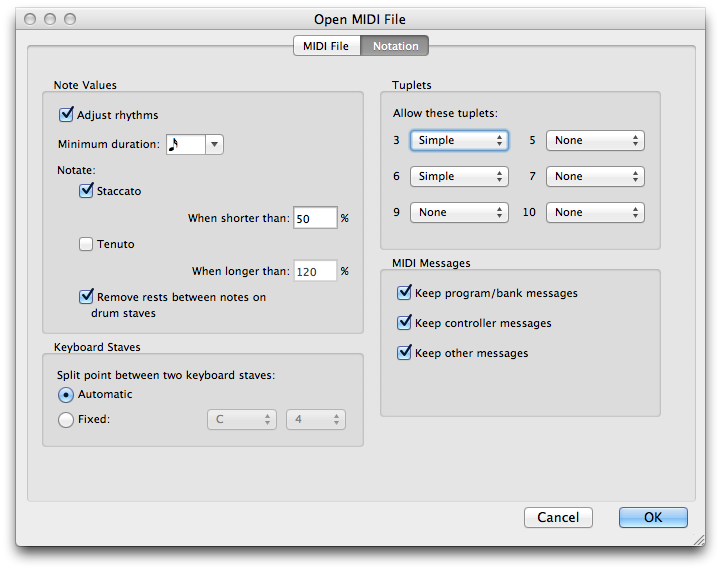 If any sheet music exists, obtain it.  Even if you can only find a low-resolution scan on the IMSLP/Petrucci Music Library, or grab a picture of the start of the score on your phone, it will help you resolve ambiguous cases like this.

Tidying up the MIDI file is still often the fastest way to get music into your preferred notation program, but you can make it easier and faster if you understand the features and limitations of the format.