The Friendly Beaches are a long expanse of beach in Tasmania, Australia. They are just north of the famed Freycinet Peninsula on Tasmania’s East Coast. A scenic lookout overlooks the beaches. 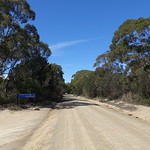 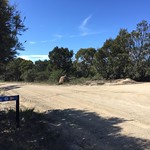 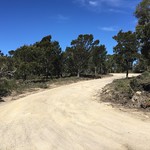 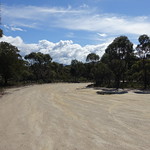 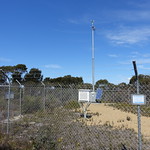 Friendly Beaches did not have extravagant amenities at the time of our visit in September 2016. All of Friendly Beaches Road was unsealed, and the only facilities were toilets without running water at each end of the road. However, Friendly Beaches also experienced a fraction of the crowds that flocked to Freycinet Peninsula. 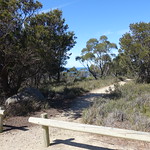 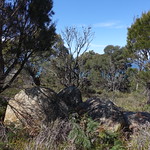 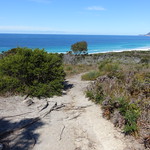 The car park was well marked, but no signs drew attention to the track leaving it. The track simply passed between two barriers on its way down the hill. Once located, it was easy to follow. It was not particularly steep. 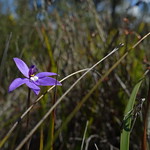 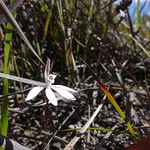 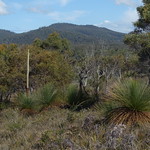 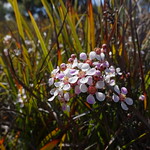 The vegetation was typical of Tasmania’s coasts, with short trees and shrubs capable of growing in salty soil and the occasional harsh inshore wind. Grass trees (Xanthorrhoea) were common. A modest assortment of spring wildflowers brightened up the landscape, including a few orchids for those who looked closely enough. 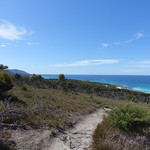 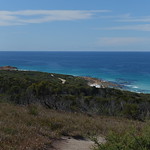 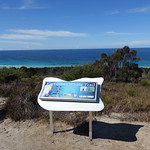 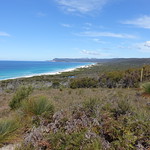 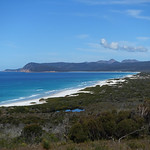 The lookout itself was marked by an East Coast Whale Trail Sign. These signs appeared at a number of coastal locations. To actually see a whale, you would need to visit in the right season and be very patient. From this point there was a clear view of the southern sweep of Friendly Beaches to Friendly Point, with The Hazards on Freycinet Peninsula beyond. The view to the north took in Butler’s Point and Cape Lodi, but not the beaches themselves.

There was a view from the car park for those who do not wish to venture further. However, even a little stroll opened up new vistas of the stunning white beaches. The track was not steep but did have tree roots in places so care is needed to get down to the lookout proper. The track continued on all the way to the beach but this is not recommended for unsteady walkers. Drive further on to the car park right beside the beach to find a viewing platform on the sand.

If you want to see Tasmania’s most famous beach, go to Wineglass Bay. You will need to walk a long climb up stone steps, surrounded by many other enthusiastic visitors to Freycinet Peninsula. For a much shallower walk with many fewer people, come to the Friendly Beaches Scenic Lookout instead.

If you are planning a walk on Friendly Beaches, stop at the lookout first to gain a sense of the local geography.