It is also possible that your computer isn’t burning CDs properly.  See Why does the music CD I burnt on my computer skip when I play it?

If you are sure the CD does indeed work in computers, it is probably a formatting problem.

Music CDs contain audio tracks, making them distinct from data CDs, which contain files and folders.  It may help to think of music CDs as a special type of filesystem, as described in Why can other computers write to this memory stick, but mine can’t?

The music CD “filesystem” contains no files and no folders – just a sequence of audio tracks.

This is not immediately obvious, because if you put a music CD in your computer, it will still display a list of “files”.  On Windows, these appear as “CD Audio Track” files, with a .cda extension((For more about file extensions, see What is a file extension? Why does it matter?)).  Windows uses these 1 kilobyte files as placeholders for the actual music tracks.  Do not attempt to copy them, as at best you will create broken links.  If you want to copy the audio tracks from a music CD to your computer, rip it in Windows Media Player or iTunes.

Exploring a music CD on Windows

However, Mac OS does something that is both clever and confusing.  If you open a music CD in the Finder, it shows “AIFF-C Audio” (.aiff extension) files, each many megabytes.

If iTunes is running, has an Internet connection and your music CD is in its database, it will shortly update those filenames with the actual track names1.

If you copy these .aiff files to your computer, you will have audio files you can listen to.  Were they on the music CD all along?  No, Mac OS “ripped” the CD tracks into audio files when you copied them.

If you use Mac OS to copy from the CD as described above, you will end up with “lossless” audio files.  These will have excellent quality (same as the CD), but take up a lot of space.  Usually you should rip music CDs to “lossy” files: MP3, AAC or WMA.  (If for some reason you want to rip losslessly, you can change your iTunes or Windows Media Player preferences to suit.)

How can I tell the difference between an audio CD and a data CD?

Windows considers all CDs to have the filesystem “CDFS”.  However, if the “Autoplay” window appears, you will see a difference between “Audio CD” and “Audio files”. 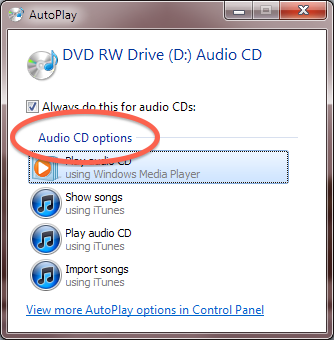 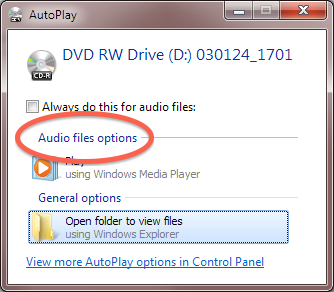 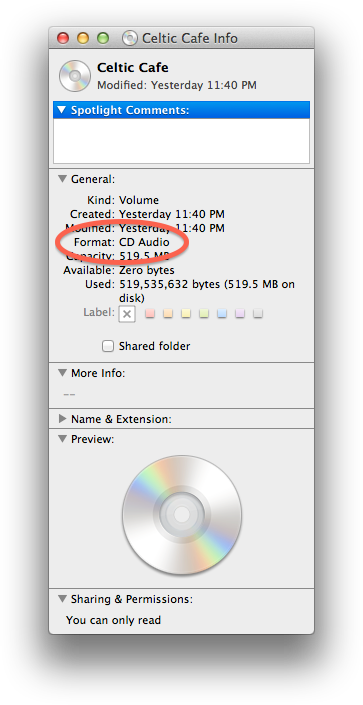 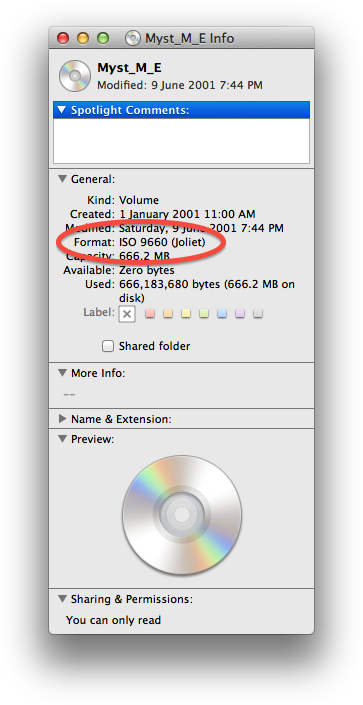 If you aren’t creating audio CDs, many CD players won’t know what to do with the discs you burn.

I have a data CD.  Some CD players can play it, but some can’t.  How do they do that?

Some modern CD players are smart enough to recognise recognise data discs and decode any audio files on them.  However, even these smart players can often only decode MP3-formatted files.  This is a problem because, by default, Windows Media Player creates WMA (Windows Media Audio)4 files, while iTunes creates AAC (Advanced Audio Coding)5 files.

You can change the default audio format in Windows Media Player or iTunes, and convert existing files to that format6.

However if you want maximum compatibility – to create a disc that will play anywhere – it is still best to burn tracks to a music CD7.

How do I burn an audio CD, and not a data CD?

After burning, make sure your disc is of the format you expected, by testing its “Autoplay” description (Windows) or by selecting it and choosing “File” → “Get Info” (Mac OS).

Some games used to combine CD data with audio tracks on a single disc.  This meant you could put the game CD in your CD player and listen to the music.  In the case of Warcraft II: Beyond the Dark Portal9, this was an easy way to discover the track10 that otherwise only played when “disco” was typed in the game.

This practice ended because CD audio, while high quality, took up a lot of space.  With the increasing use of full motion video, CD audio tracks became a disc-filling luxury that publishers couldn’t afford.